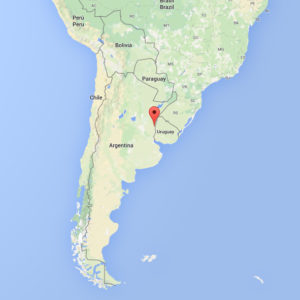 History:
A bright bolide of absolute magnitude -16±2 was widely seen over Argentina and Uruguay. The fireball was recorded by U.S. satellite visible-light sensors as reported by Douglas O. ReVelle (Los Alamos National Laboratory). A crude analysis of recorded infrasound data suggests a 0.01 kT event as analyzed by Peter Brown and Wayne Edwards (University of Western Ontario, Canada). The event occurred nearby the Argentina-Uruguay border. Eyewitnesses, interviewed by members of AEA and Gonzalo Tancredi (DAFC), reported that the fireball traveled from west to east and experienced several fragmentations along its trajectory causing audible detonations that shattered buildings in the area of fall. Several stones were found by members of Asociación Astronómica Entre Ríos a few days after the fall in the countryside around Colonia Berduc. The largest piece is a 154-g sample located in MNCNA-AS that acts as the hosting institution. The MLEDU museum has a 95-g piece, and CASLEO has a piece of 21 g. The rest of the mass remaining in Argentina is in private collections.