Bjurböle 3kg
Bjurböle meteorite 21,7g
The biggest pieces of Bjurböle meteorite 80 kg and 21 kg. The main mass is in the collection of the University of Helsinki. The 21 kg piece is in the Stockholm Staatsmuseum. Picture: W. Ramsey and L.H.Borgström
Hole in the ice
A. Broken ice and the hole in B. the ice C. B. Area where mud and wather D. was spread
Meteorite penetrated the 40 cm think ice and the 8m deep layer of mud and clay.
Museum label
Museum label
Bjurböle in Paris 1900 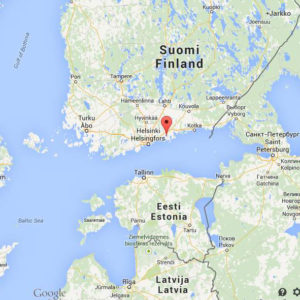 History:
Bjurböle is the biggest meteorite ever found in Finland. The total weight of the founded pieces is 328 kg. Later it became clear that some of the men who lifted the meteorite pieces from the bottom of the sea, had took some pieces for them shelves. Those pieces were sold to different people in the area of town Porvoo. When this mass is added to the 328 kilos the total weight of the Bjurböle meteorite was around 400 kg.

On the 12th of March 1899 a bright fireball was seen over the Baltic sea. In the capital of Finland, in Helsinki, this event aroused great attention.

The newspaper Päivälehti told the following:
“A big bright meteor with a long blasing tail whizzed over our city at 9:30 pm from northwest to southeast. The meteor lightened it´s surroundings like a gigantic electric bulp. The clouds seemed to be golden-haired and spreaded hither and thither. After about one minute meteor broke into small pieces with a terrible thunder. This sound lasted many minutes. The bang made the houses shook up to their foundations. People hastened out of their apartments and houses to streets and yards. Some thought it was big cannons firered in the Fortress Viaborg and some thought it is the end of the world.

If we have it correct, the same phenomenon was seen in the western and eastern side of the city. To get a better knowledge about this phenomenon we urge citizens to send their observations to the weather observatory. It is important to know when and how long the phenomenon was seen, how much time was between the appearance of the meteor and the thunder, how long thunder lasted and what direction the phenomenon went. It would be good if the viewer would have drawing showing the direction of the meteor compared to the location of the viewer.”
The hole in the ice made by the Bjurböle meteorite.

Picture: Suomen kuvapalvelu
These witness reports were important to get a good information of the meteors trajectory. The fireball was seen all around Baltic sea and Southern Finland. The fireball passed Helsinki from the south side, over the Baltic sea. The altitude was around 20 kilometer

The fireball hit an ice covered sea bay on the southern side of the town Porvoo, 50 km east of Helsinki. Next day a 3-4 meters wide hole in the ice was found close to the shore. A big amount of mud was spread all around the hole in the ice. Meteorite had went through the 40 cm thick ice. The water was only 50 cm deep under the ice, but after that there was a 8 meters deep layer of mud and clay before the bedrock. With long sticks people tried to find the meteorite itself, but that did not succeed in the beginning. Because it was sure that this was exact the point were the meteorite had hit it was build a waterproof wooden well out of wooden beams. This wooden well was shunken through the hole in the ice to the bottom of the mud layer. Then well was emptied out of water and mud. This did not succeed completely, but in the end a diver was able to find the meteorite and pulled the pieces up to the ice.

A. Broken ice and the hole in
B. the ice
C. Area where mud and water
D. was spread

Meteorite penetrated the 40 cm think ice and the 8m deep layer of mud and clay.
The biggest pieces weight 80, 21, 18 and 17 kg. The biggest piece is 30-40 cm thick. The whole meteorite has been 1m wide before break down to pieces. After the meteorite was recovered it needed to dry before it was able to be researched. Bjurböle meteorite is very soft and fragile material and breaks very easy. Bjurböle is a ordinary chondrite with great chondrules that size from very small to the size of fingertip.

Two owner of the property where the meteorite had fallen received a 500 Finnish marks compensation for the damages that has happened to the fish spawning place. This money was given forward to the benefit of the local school.

The biggest pieces of Bjurböle meteorite 80 kg and 21 kg.
The main mass is in the collection of the University of Helsinki.
The 21 kg piece is in the Stockholm Staatsmuseum.
Picture: W. Ramsey and L.H.Borgström

Specimen Description:
The bigger specimen is a fragment with a museum “stamp”. The specimen comes from a Museum trade with label.
(Helsinki University number D 5504).
The smaller piece is a rare example of a crusted Bjurböle piece.
90% of the pieces are without crust.

Comments:
Bjurböle is the biggest fall in Scandinavia with an extraordinary history.
It is one of the few meteorites found underwater.
Labels from the collection of the University of Helsinki,
now named: Luonnontieteellinen keskusmuseo