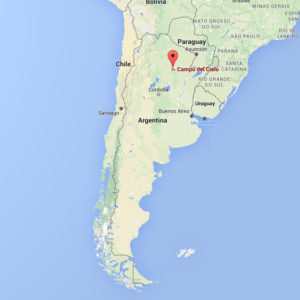 History:
The Campo del Cielo refers to a group of iron meteorites or to the area where they were found. This area is situated on the border between the provinces of Chaco and Santiago del Estero, 1,000 kilometers (620 mi) northwest of Buenos Aires, Argentina. The crater field covers an area of 3×18.5 kilometers and contains at least 26 craters, the largest being 115×91 meters. The craters’ age is estimated as 4,000–5,000 years. The craters, containing iron masses, were reported in 1576, but were already well known to the aboriginal inhabitants of the area. The craters and the area around contain numerous fragments of an iron meteorite. The total weight of the pieces so far recovered exceeds 100 tonnes, making the meteorite the heaviest one ever recovered on Earth. The largest fragment, consisting of 37 tonnes, is the second heaviest single-piece meteorite recovered on Earth, after the Hoba meteorite.

In 1576, the governor of a province in Northern Argentina commissioned the military to search for a huge mass of iron, which he had heard that Natives used for their weapons. The Natives claimed that the mass had fallen from the sky in a place they called Piguem Nonralta which the Spanish translated as Campo del Cielo (“Field of Heaven”). The expedition found a large mass of metal protruding out of the soil. They assumed it was an iron mine and brought back a few samples, which were described as being of unusual purity. The governor documented the expedition and deposited the report in the Archivo General de Indias in Seville, but it was quickly forgotten and later reports on that area merely repeated the Native legends. Following the legends, in 1774 don Bartolome Francisco de Maguna rediscovered the iron mass which he called el Meson de Fierro (“the Table of Iron”). Maguna thought the mass was the tip of an iron vein. The next expedition, led by Rubin de Celis in 1783, used explosives to clear the ground around the mass and found that it was probably a single stone. Celis estimated its mass as 15 tonnes and abandoned it as worthless. He himself did not believe that the stone had fallen from the sky and assumed that it had formed by a volcanic eruption. However, he sent the samples to the Royal Society of London and published his report in the Philosophical Transactions of the Royal Society. Those samples were later analyzed and found to contain 90% iron and 10% nickel and assigned to a meteoritic origin.

Later, many iron pieces were found in the area weighing from a few milligrams to 34 tonnes. A mass of about 1 tonne known as Otumpa was located in 1803. A 634 kilograms (1,398 lb) portion of this mass was taken to Buenos Aires in 1813 and later donated to the British Museum. Other large fragments are summarized in the table below. The mass called el Taco was originally 3,070 kilograms (6,770 lb), but the largest remaining fragment weighs 1,998 kilograms (4,405 lb).

The largest mass of 37 tonnes was located in 1969 at a depth of 5 m using a metal detector. This stone, named El Chaco, is the second heaviest single-piece meteorite after the Hoba meteorite (Namibia) which weighs 60 tonnes. However, the total mass of the Campo del Cielo fragments found so far exceeds 60 tonnes, making it the heaviest meteorite ever recovered on Earth.

In 1990 a local Argentinean highway police officer foiled a plot by Robert Haag to steal El Chaco. The stone had already been moved out of the country, but was returned to Campo del Cielo and is now protected by a provincial law.
In 2015, police arrested four alleged smugglers trying to steal more than a ton of protected meteorites.

Specimen Description:
Two complete pieces one with natural patina and silicate inclusions. This is from earlier finds. The other is a cleaned individual with nice shape.