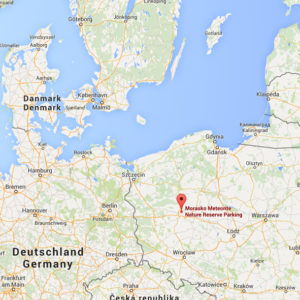 History:
A mass of 77.5 kg was discovered in November 1914 by a German soldier, Dr. Cob liner, who was engaged in fortification works near Morasko. The mass was recovered from a depth of about 50 cm and was an entire monolith with regmaglypts. It came to Berlin, but after the first World War it was retrieved for the Poznan collection, and is now diminished by cutting to 61 kg. Three additional masses, of 4.2, 3.5 and 3.5 kg were later found in the vicinity, and all were pictured and briefly described by Pokrzywnicki (1956).

In the 1950s focus centered upon some small ‘craters’ both west and east of Morasko. They were fully described, with a map, cross sectional drawings, etc., by Pokrzywnicki (1964: 49) who also reported the discovery of several new masses weighing respectively 78, 75, 6.38, 4.18 and 3 kg. In addition, seven specimens totaling 28 kg, five specimens totaling 8 kg, and several smaller specimens totaling 4 kg were discovered. Thus a total of almost 300 kg has now been recovered.

Until further information becomes available the ‘craters’ are perhaps best thought of as large impact holes. Eight have been described by Pokrzywnicki {1964). Ranging in size from 60 m to 25m, they appear to be situated within a narrow elliptical area with axes of 1.4 and 0.3 km and with the major axis extending in the direction Wl5°N. The fragments discovered so far have been found in the immediate vicinity of the impact holes but not actually in them.

Specimen Description:
A complete piece with nice regmaglypts find by by Lukasz Smula and Magdalena Skirzewska