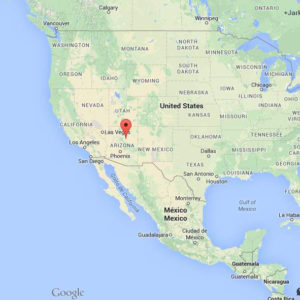 History:
The asteroid fell about 50,000 years ago. The meteorites have been known and collected since the mid-19th century and were known and used by pre-historic Native Americans. The Barringer Crater, from the late 19th to the mid-20th century, was the center of a long dispute over the origin of craters that showed little evidence of volcanism. That debate was settled in the 1950s thanks to Eugene Shoemaker’s study of the crater.

In 1953, Clair Cameron Patterson measured ratios of the lead isotopes in samples of the meteorite. The result permitted a refinement of the estimate of the age of the Earth to 4.550 billion years (± 70 million years).

Probably more than 20,000 fragments ranging from 50 g to 639 kg have been recovered since 1891 in Coconino County from a roughly circular region 15 km in diameter, in the center of which Meteor Crater is situated. The biggest fragment ever found is the Holsinger Meteorite, weighing 639 kilograms (1,409 lb), now on display in the Meteor Crater Visitor Center on the rim of the crater.

Specimen Description:
This is a complete piece with a hole probably made by fallen out trollite inclusion. Specimen have natural patina that is typical to Canyon Diablo meteorites.