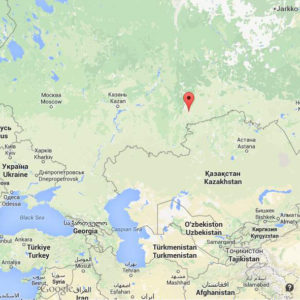 Remarks: Bigger piece comes with in situ picture and gps-coordinates. Piece is found 28.8.2013

History:
The Chelyabinsk meteor was a superbolide caused by a near-Earth asteroid that entered Earth’s atmosphere over Russia on 15 February 2013 at about 09:20 YEKT (03:20 UTC), with a speed of 19.16 +/- 0.15 kilometres per second (60,000[5] – 69,000 km/h or 40,000 – 42,900 mph). It quickly became a brilliant superbolide meteor over the southern Ural region. The light from the meteor was brighter than the Sun, even at 100 km distance. It was observed over a wide area of the region and in neighbouring republics. Eyewitnesses also felt intense heat from the fireball.

On account of its high velocity and shallow angle of atmospheric entry, the object exploded in an air burst over Chelyabinsk Oblast, at a height of around 29.7 km (18.4 miles, 97,400 feet). The explosion generated a bright flash, producing a hot cloud of dust and gas that penetrated to 26.2 km, and many surviving small fragmentary meteorites, as well as a large shock wave. The majority of the object’s energy was absorbed by the atmosphere, with a total kinetic energy before atmospheric impact equivalent to approximately 500 kilotons of TNT (about 1.8 PJ), 20–30 times more energy than was released from the atomic bomb detonated at Hiroshima.

The object was undetected before its atmospheric entry, in part because its radiant was close to the Sun. Its explosion created panic among local residents and about 1,500 people were injured seriously enough to seek medical treatment. All of the injuries were due to indirect effects rather than the meteor itself, mainly from broken glass from windows that were blown in when the shock wave arrived, minutes after the superbolide’s flash. Some 7,200 buildings in six cities across the region were damaged by the explosion’s shock wave, and authorities scrambled to help repair the structures in sub-zero (°C) temperatures.

With an estimated initial mass of about 12,000–13,000 metric tonnes (13,000–14,000 short tons, heavier than the Eiffel Tower), and measuring about 20 metres in diameter, it is the largest known natural object to have entered Earth’s atmosphere since the 1908 Tunguska event, which destroyed a wide, remote, forested area of Siberia. The Chelyabinsk meteor is also the only meteor confirmed to have resulted in a large number of injuries.

In the hours following the visual meteor sighting, a 6-metre (20 ft) wide hole was discovered on Lake Chebarkul’s frozen surface. It was not immediately clear if this was the result of an impact; however, scientists from the Ural Federal University collected 53 samples from around the hole the same day it was discovered. The early specimens recovered were all under 1 centimetre (0.39 in) in size and initial laboratory analysis confirmed their meteoric origin. They are ordinary chondrite meteorites and contain 10% iron. The official name for such fragments is designated as Chelyabinsk meteorite. The Chelyabinsk meteor was later determined to come from the LL chondrite group.
Pieces of the meteor were discovered by an expedition from the Ural Federal University.

In mid-February 2013, a team of six Russian Emergencies Ministry scuba divers examined the bottom of the lake but found no fragment large enough to have caused the 6-metre-wide hole in the ice.

In June 2013, Russian scientists reported that further investigation by magnetic imaging below the location of the ice hole in Lake Chebarkul had identified a 60-centimetre (2.0 ft)-size meteorite buried in the mud at the bottom of the lake. Before recovery began, the chunk was estimated to weigh roughly 300 kilograms (660 lb).

Following an operation lasting a number of weeks, it was raised from the bottom of the Chebarkul lake on 16 October 2013. With a total mass of 654 kg (1,442 lb) this is the largest found fragment of the Chelyabinsk meteorite. Initially, it tipped and broke the scales used to weigh it, splitting into three pieces.

In November 2013, a video from a security camera was released showing the impact of the fragment at the Chebarkul lake. This is the first recorded impact of a meteorite on video. From the measured time difference between the shadow generating meteor to the moment of impact, scientists calculated that this meteorite hit the ice at about 225 meters per second, 64 percent of the speed of sound.

Specimen Description:
The bigger piece comes with in situ picture and gps-coordinates. Piece is found 28.8.2013 by a Russian meteorite hunter. The smaller piece is a super fresh piece that is picked up a couple of days after the fall. I also donated a glass jar half full of small Chelyabinsk peas to the Helsinki University.