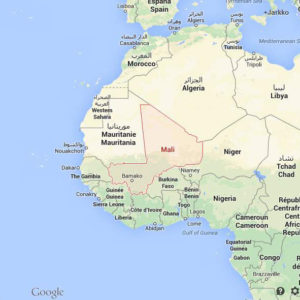 Chondrite H5
Many crusted complete pieces from 0,5g to 12,9 kg

History:
Eyewitnesses reported a single bolide exploding over the city of Adrar in Algeria and descending in numerous glowing fragments towards Mali territory. The following day Mali soldiers commited a search for the remains of what was thought to be a missile launched from Algeria but returned without success. 15 days later Sommane Oueld El Mokhtar a nomad taking care of his camels in the Erg Chech claimed to have found rocks that recently rained from the sky. Finds have now been reported from both sides of the Algerian Mali border. The strewn field is reported to extend over more than 30 miles.

A Moroccon meteorite hunter team at the site of the first finds.
Photo courtesy of Mohamed Zeroual, via S. Buhl

Nomads reported that the stones fell after a smoke cloud was seen and several detonations were heard over a wide area during daytime in July 2nd or 3rd 2007 in northern Mali. Mohamed Ouled Bleila, an Algerian meteorite hunter, found the first official meteorites of Chergach fall. He was later killed in an unfortunate car accident while returning with his 4×4 Toyota from the strewnfield.

In fall and winter, 2007 ~100 kg of meteorites were collected in the Erg Chech, north of Taoudenni.

Specimen Descriptions:
1. A lot of complite crusted Chergach pieces rangeing from 0,5g to
423,3g. Totally 74 individuals including many oriented pieces.
2. A 12,9 kg individual from the Chergach fall. Part of the specimen is broken off. This is the third biggest specimen existing after 17,8 kg (Patrick Herrman) and 13,9kg (Dave Gheesling) pieces.