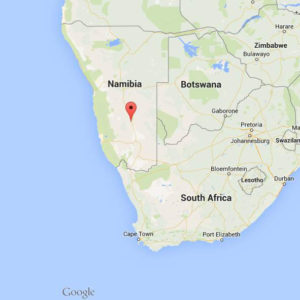 History:
The meteorite was discovered by the Nama people and used by them to make tools and weapons. In 1836 the English captain J. E. Alexander collected samples of the meteorite in the vicinity of the Great Fish River and sent them to London. There John Herschel analyzed them and confirmed for the first time the extraterrestrial nature of the material. In the years following, Europeans established large cattle ranches in the area and recovered many more large meteorites. A 232 kg mass was recovered in 1857. Many masses between 100 and 500 kg were recovered in the years shortly after 1900. As late as the publication of the Handbook of Iron Meteorites in 1975, scientists were reporting the that Gibeon consisted primarily of large masses and lacked the smaller pieces like those found at Canyon Diablo, Odessa, and Sikhote-Alin. Buchwald speculated that greater knowledge might reveal smaller specimens or that smaller fragments may have been collected by natives and made into tools. It seems that lack of knowedge may have been the answer.

The fragments of the meteorite in the strewn field are dispersed over an elliptical area 275 kilometres (171 mi) long and 100 kilometres (62 mi) wide. The term Gibeon encompasses the whole meteoritic material fallen from the sky during this fall. This material is classified as an iron meteorite belonging to the chemical group IVA.

Gibeon meteorites are composed of an iron-nickel alloy containing significant amounts of cobalt and phosphorus. The crystal structure of this meteorite provides a classic example of fine octahedrite and the Widmanstatten pattern is appreciated for its beauty both by collectors and designers of jewelry.

An excellent article about Gibeon meteorites written by Dr Svend Buhl can be found here:
http://www.meteorite-recon.com/en/Gibeon_Iron_Meteorites_1.htm

Specimen Description:
This is a complete piece with natural patina and original crust.