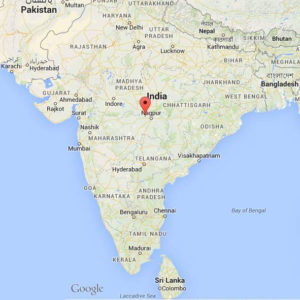 Remarks: broken in half due to impact

History:
On May 22, 2012, at 14:10 local time, a large meteor shower occurred over the town of Katol in the Nagpur District of India. The loud noise and the fire ball of the event were experienced by hundreds of inhabitants. The Katol meteorite shower created panic among people, but no loss of life or damage to the property was reported. The Geological Survey of India carried out detail field study in the area covering Akola in the west to Katol in the east. At least 30 stones were recovered by GSI in an ellipse centered around 21°15.837’N and 78°35.485’E.

Map of the Katol Strewnfield
In the preliminary studies of Katol meteorite it was classified as an ordinary olivine rich H5 type reconstituted chondrite. The results was publiched in the Journal of Geological Society of India in february 2013. The classification was questioned as soon it was publiched. Many people thought Katol was an achondrite with white matrix. Some pieces are nearly green with crystals and some pieces have huge metal nodules. Finally it was classified as L6 chondrite and that was approved on the 31st of December 2013.

A. Iron nodule in the matrix
B. Tin shed penetrated by a Katol meteorite
The largest stone of this fall weight around 1 kg. Crust ranges from glossy to black and dull. In addition to the stones, at least five iron-rich objects were collected, the largest being a 7 × 5 × 2 cm, 136 g oriented shield (Mike Farmer). Total recovered mass is in excess of 13 kg.

Specimen Description:
The specimen is a complite crusted piece that has broken in two pieces due to impact. Green olivine crystals and black shock veins are clearly seen in the white matrix of the broken surface.

Comments:
Katol is a strange meteorite on the boarder of the chondrites and achondrites.