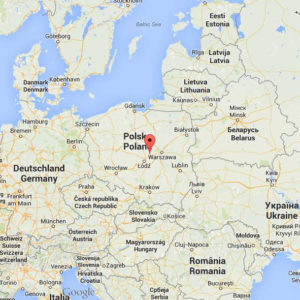 History:
The first meteorite in the collection of the Museum of the Earth was Lowicz stony-iron meteorite, which fell in the form of a shower on March 12th, 1935. The Museum Society had sent at once its representatives S.Z. Rozycki and M. Kobylecki to the area of Lowicz to collect the specimens and to get information on this phenomenon from local witnesses. They reported that ”the area of possible occurrence of meteorites has a form of a band at least 5km long. Consequently, even if the width of this band was negligible, a mass action is necessary to carry out fruitful prospecting for meteorites. The best prospectors would be the local population who knows well the area and all the larger stones occurring here. Even moderate prizes could stimulate this prospection. One collective meteoritic expedition organized within Wrzeczko village which lasted but several hours resulted in the find of 8 specimens, including those about 0,5 kg in weight” (Rozycki, Kobylecki, 1935) The total result of this expedition was 35 specimens in 50 fragments. Among them were several fragments of the largest meteorite, about 10 kg in weight, found in Krepa village within the field of Stanislaw Barbucha farm. This meteorite was found first and disintegrated into smaller pieces by local farmers (catalogue numbers 12.32, 12.37, 12.40, 12.44).
Lowicz meteorite strawnfield – Rozycki, Kobylecki 1936

In Rozycki and Kobylecki´s opinion the total weight of the Lowicz meteorite amounted to about 110 kg. The largest specimen, 5670g in weight, is gathered in the collections of the Geological Museum of the Cracovian Brach of the Institute of Geological Science, Polish Academy of Sciences. The second and fourth in weight (5650g and 2950g respectively) are preserved in the Geological Museum of the Jagellonian University in Cracow, and third 3900g in weight – in the Astronomic Observatory of the Warsaw University (Pilski 1992). The fifth in size (2858g) is in the collection of the Museum of the Earth. The Collection Catalogue of The Museum of the Earth in Warsaw, 1995

Specimen Description:
Complete piece mainly with secondary crust surfaces, with HED like crust and large grains of iron, some flow lines can be noted as well as one cavity probably due to burning of the inclusion. The specimen comes from a Museum trade with label, catalog number hand painted on the specimen.