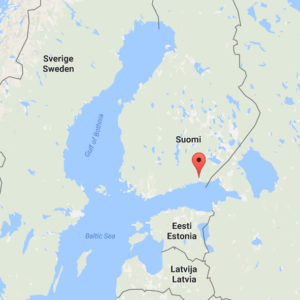 History:
Kalle Kunnari found a rusted stone from his field in autumn in 1938. The stone was ball shaped and weight around 1 kg . He send the piece to Geological Survey of Finland, hoping that it would be iron ore. In the preliminary research the stone was broken in pieces and part of it was pulverized. Because the stone contained nickel, three summer helpers were send to look for the parent rock.

The students returned with empty hands in Helsinki in late autumn. Professor Väyrynen saw the remnants of the stone and realized that it was a meteorite. So all looking for parent rock had been hopeless. Proper analysiz of the meteorite was done later due to World War II. It was done 1950´s and early 1960´s by Birger Wiik and Brian Mason.