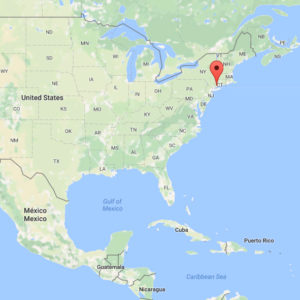 History:
At 6:30 a.m. on Dec. 14, 1807, a red ball of fire about two-thirds the size of the full moon was seen by witnesses from southern Vermont to Fairfield County, Conn. in the USA. Three loud booms were heard followed by a rumbling like a cannonball rolling along a wooden floor. Witnesses heard a whizzing sound near the six places where the meteorite fragments fell. Most of them fell in parts of Trumbull, Conn., and what is now the town of Easton, Conn., but was then Weston.

From Albany to Fairfield County, the meteor frightened farmers, milkmaids, schoolchildren and horses.
Judge Nathan Wheeler was taking his daily walk across his land in Weston when the sky illuminated his house, his barn, his trees, his stone walls. Dr. Isaac Bronson was traveling along the Boston Post Road when the inside of his stagecoach lit up and rocks clattered on the roof. In Rutland, Vt., William Page looked up from his doorstep and saw a meteor heading south, leaving a ‘vivid, sparkling train of light.’ A Mrs. Gardner watched it for 30 seconds from her bedroom window in Wrentham, Mass.

When his friend Isaac Bronson told him about the meteorite, Benjamin Silliman dropped everything and bolted for Weston. He brought his colleague, classics professor James Kingsley, because of his skill at interviewing and writing. Silliman and Kingsley immediately ran into trouble: The townsfolk of Weston were doing a brisk business in meteorite sales. The William Prince family, for example, dug up a large fragment in their yard, smashed it into pieces and sold it off. The two professors did manage to collect meteorite fragments, interview witnesses and map the fall sites with help from the townspeople. Silliman was excited to discover in the stones round grains, or chondrules, which he knew weren’t present in earthly rocks. He published his conclusion that the fireball had fallen from space in the Connecticut Herald on Dec. 29, 1807. He estimated the meteor to be a half-mile in diameter and to have traveled at a rate of 200 or 300 miles a minute.

The sensational story about the ‘terrestrial comet’ spread as other newspapers copied it. The discovery was deemed so important that another version of Silliman’s work was read before the Philosophical Society of London and in the Academy of Sciences of Paris. When told of the Yale professors’ theory, Thomas Jefferson is said to have remarked, ‘it is easier to believe that two Yankee professors could lie than to admit that stones could fall from heaven.’ Another writer alluded to the Puritan susceptibility to nightmarish visions of unearthly phenomena. Washington Irving, in the first version of the History of New York, the narrator said of New England, ‘the people at large show a keenness, a cleverness and a profundity of wisdom that savors strongly of witchcraft—and it has been remarked that whenever any stones fall from the moon, the greater part of them is sure to tumble into New England.’To defend his conclusion, Silliman founded the American Journal of Science. Established as one of the preeminent scientists of his age, he was the first person to distill petroleum. His son, Benjamin Silliman, Jr., was also a chemistry professor at Yale and was instrumental in developing the petroleum industry. Fragments of the Weston meteorite can be viewed at the Yale Peabody Museum of Natural History, where they are the first catalogued objects in the Yale meteorite collection, the oldest in the United States.

Specimen Description:
This is a complete piece with a cut window. Piece is ex Robert Haag collection piece and has some painted markings on the surface. Piece comes with an old print about Weston fall.