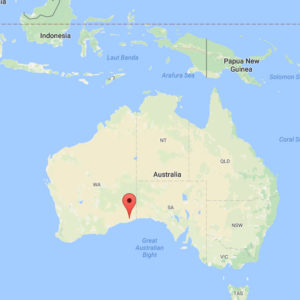 In 1918 a third similar small iron meteorite of 99 g was found in the area and it was named Premier Downs III.
Perhaps in 1962 (date is not certain) another small iron of 108 g with similar characteristics was found near Loongana Station by Mr. Harrison. McCall and DeLaeter (1965) suggested a possible pairing with the previous Premier Downs samples.

In 1965 three small iron individuals (94.1 g, 45 g, 38.8 g) were found by W. A. Crowle 16 km north of Mundrabilla Siding at 30°45′S 127°30′E. In April 1966 two very large iron masses of 9980 kg and 5440 kg were found in the Nullarbor Plain at 30°47′S 127°33′E by geologists R. B. Wilson and A. M. Cooney during a geological survey. The two masses were lying 180 metres apart, in clayey soil within very slight depressions. The masses were surrounded by a large number of small iron fragments. These meteorites were called Mundrabilla, while the largest fragment, the eleventh largest ever found in the world as of 2012, is distinguished as Mundrabilla I.
In 1967 a small iron (66.5 g) was found at 30°57′S 126°58′E by W. H. Butler, it was named Loongana Station West.[3]
McCall and Cleverly (1970) suggested that the Mundrabilla meteorites were actually closely related to the Loongana Station and Premier Downs meteorites, and had been shed from the same mass during the atmospheric ablation.
The main mass of 9980 kg is now conserved at the Western Australia Museum.

This meteorite is unique as it is the largest meteorite found in Australia, and the largest chunk is the eleventh largest fragment found worldwide so far (2013). As it burnt through the atmosphere the troilite disappeared leaving pockets and holes in the large fragments. The meteorite has been studied by NASA in 2002 examining natural alloy formation of the iron sulphide and iron nickel. This large meteorite contains an impressive number of reduced extraterrestrial compounds, but weathering products are found both near the surface and in interior veins. It is part of the IAB Group, Mundrabilla duo sub-group which only has five members.

It appears to have disintegrated into fragments as it fell to earth, and these have been found over a wide area of the nullabor desert. The areas remote nature and widespread distribution of fragments has meant their discovery has been a gradual affair.

Discoveries continued with one dealer suggesting over 500 knuckle sized fragments have come onto the market recently.

Many meteorites from separate falls have been found on the Nullabor Plain. Often as widely scattered individual stones or in small groups. Many were recovered by the Carlisle family who were rabbit trappers during the 1960’s and 1970’s, amongst many other individuals. Whether all meteorites labelled Mundrabilla are from this fall, or are from others, is something collectors need to determine.