Norton County meteorite
The main mass about 1,070 kilograms is the center piece of the meteorite display at the University of New Mexico in Albuquerque. Picture: Jim Strope
University label 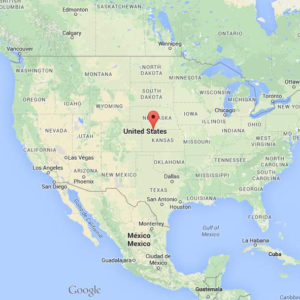 History:
The aubrites were some of the rarest of the stony meteorites until 1948. That changed after a brilliant fireball on February 18, 1948. Fireball was followed by a loud noise. A very large shower of meteorites fell over a large area of Norton County (Kansas) and Furnas County (Nebraska). It is estimated that over 100 stones fell, biggest weighed 2360 lb and the second most massive weight in at 131,5 lb. The main mass made a penetration hole 10 feet deep. A field party from the Institute of Meteoritics, University of New Mexico wrapped the huge meteorite in a protective plaster jacket. Silmilar methods are used by the paleontologists to move the fragile bones. This way the largest intact achondrite ever found was able to be moved to the University.

Aubrites have a pale beige-colored fusion crust with a white interior. These meteorites are almost pure magnesium silicate. They also contain small amounts of exotic minerals not found on the Earth including the rare sulfides oldhamite and niningerite.
The main mass about 1,070 kilogramsis the center piece of the meteorite display at the University of New Mexico in Albuquerque

Specimens Descriptions:
All the pieces are fragments and they come with University of New Mexico numbers and labels:

The biggest specimen is exchanged by Jim Strope. He made an exchange with the museum with a Tissint meteorite. The Tissint meteorite is a Martian meteorite that fell in Tata Province in the Guelmim-Es Semara region of Morocco on July 18, 2011. This 135g piece is the biggest piece out of this trade. The second biggest was around 90g and all the rest was smaller. At the same time there was also another trade by some other dealer. That deal was similar and mostly small pieces as the museum did not want to trade big pieces. These trades brought a lot of small fragments to the meteorite market and I assume that the rest of small pieces are from these two deals. The other pieces are bought from Arnaud, owner of The Tricottet Collection.
A copy of the label of the University of New Mexico