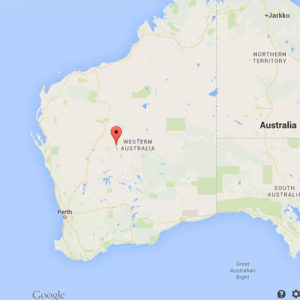 History:
Millbillillie meteorite is a meteorite named after the cattle station in Australia on which it fell in October 1960. A fireball was observed “with sparks coming off it” by two stationworkers while they were opening a gate in the boundary fence on a track between Millbillillie and Jundee cattle stations. The object fell on a plain to the north. No search was made at the time but in 1970 and 1971 locals found two stones; Aboriginals have found others since.

The largest stone weighed 20 kilograms (44 lb). It and a smaller one of 565 grams (19.9 oz) are held by the Western Australian Museum. Millbillillie has been classified as an Achondritic (Polymict) Eucrite and displays a beautiful rich black glassy fusion crust. Stones have also picked up desert soil, which can be seen as the reddish color on the meteorite.