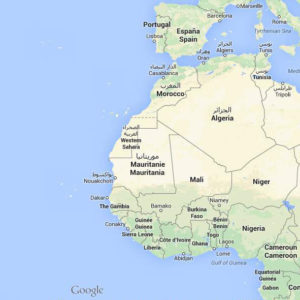 History:
(H. Chennaoui Aoudjehane, FSAC) In September, 2011, a Moroccan meteorite hunter found the first pieces of NWA 6963 and sold it to A. Habibi without giving the exact provenance. The hunter continued collecting pieces in the same area for about 6 months. In mid-May, 2012, the NWA 6963 locality, near the river Oued Touflit, became widely known and hundreds of meteorite hunters went to the area searching for more pieces. Pieces ranging from 100 to 700 g have been recovered, as well as a few small pieces (3-10 g), most of them are broken and partially covered by a thin fusion crust. The total mass may be as much as 8-10 kg. This meteorite has almost the same composition as the famous martian meteorite Shergotty