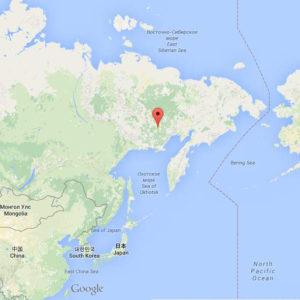 History:
The main mass of 272.3 kilograms (600 lb) was found during a survey in June 1967 by geologist F. A. Mednikov. The mass was a triangular-shaped thumbprinted meteorite lying among the stones of the brook bed. A second specimen of 51 kilograms (112 lb) was found with a mine detector at a distance of 20 m from the first in October 1967 by I. H. Markov. The main mass was turned over to the Academy of Sciences of the USSR.

During a new expedition in 2004, Dmitri Kachalin recovered about 50 kilograms (110 lb) of new material. Remarkably, about 20% of the new specimens were found to contain olivine crystals, and so revealed the silicated nature of the meteorite. The pallasitic structure was not previously discovered during studies on small metal-only sections of the original mass. Due to the heterogeneous structure of Seymchan, there are two types of specimens: with or without olivine crystals. Later more material has been found from close to stream flowing into the river Hekandue, a tributary of the Jasachnaja.

Specimen Description:
This is a complete piece with a window. Specimen is purchased from a Russian geologist who is the finder of this piece.