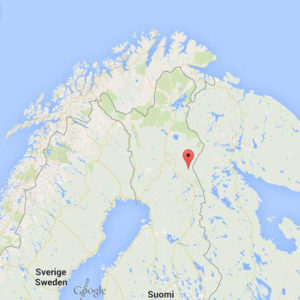 History:
Farmer Kauko Piisilä found a rusted stone of 2,9 kg lying on the ground in summer 1963 in his property in Salmivaara village, Salla. During those times it was common in Finland to organise ore finding competitions and therefore he send the piece to Otamäki company in Rovaniemi. Geologist Veijo Yletyinen was on a visit to the mining company and recognized the piece as a meteorite. It was in a form of a half a ball. The even surface was less weathered than the rest of the piece so it was expected that this was a part of a bigger piece. Some of the missing parts were found later in a search. The total mass of found pieces is around 7 kg. It is possible that some are still on the ground or in stone fences used by local people.

“All new stone meteorites are strongly rusted and have probably lied hundreds of years on the ground. Regardless of long time of weathering all meteorites have quite fresh material inside. This concerns especially Salla meteorite that is biggest and that way have meaning in future exchanges with foreign museums” writes Professor Wiik, who was the Curator of the collection of the University of Helsinki at that time.

The main mass of Salla.
It was cut in four pieces before it was recognized as a meteorite
Picture: B. Wiik

Specimen Description:
The specimen is a weathered cut piece with two polished cut faces. The specimen comes from a Museum trade, catalog number hand painted on the specimen. This piece was exchanged by Robert A. Haag from Professor Martti Lehtinen, Curator of the collection of the University of Helsinki on 18th May 1989. The specimen weighted 706 g at that time. (Helsinki University number B 5100). After that 88 g is cut apart. Later the specimen was sold to Matt Morgan and then to Jarkko Kettunen.

Copy of the collection card of the University of Helsinki
The Robert A. Haag Collection,
Field Guide of Meteorites,
12th anniversary edition, 1997