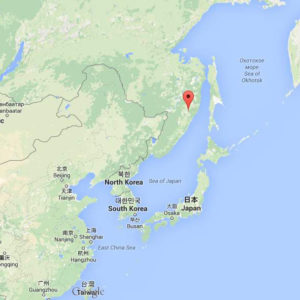 History:
Sikhote-Alin is an iron meteorite that fell on the 12:th of February 1947 in southeastern Siberia, 440 kilometers from Vladivostok in Russia. The more accurate location is on the Sikhote-Alin mountains close to village Paseka. The fireball was more brighter than the sun and it came out of the north and descended at an angle of about 41 degrees to south behind the hills of Sikhote-Alin. There was a series of loud explosions and thunder. People saw a smoke trail, which rice upwards. The smoke trail was estimated at 32 km long and it remained in the sky for several hours. It was followed with a big explosion that shook the houses and break windows. After that people told that they heared a maschine gun like sound. The pieces seem to fall in a shape of a fan and made a series of craters while some pieces penetrated through the threes. An estimated 70 tonnes (metric tons) of material survived the fiery passage through the atmosphere and reached the Earth.

Picture of a painting by P. J. Medvedev, a Soviet artist who witnessed the fall: he was sitting in his window starting a sketch when the fireball appeared, so he immediately began drawing what he saw. The original is in a museum in Moscow
An excavation team member standing in a crater in summer 1947.

The largest fragment, weighing over 3,800 pounds, being pulled from its crater in 1950 (now on display at the Fersman Mineralogical Museum)
The size of the orginal mass was around 3-4 meters wide before entering the atmosphere. The mass consists of many iron pieces that where loosely tight together. The biggest part exploded on the altitude of 5,6 kilometers. The entering speed was estimated to be 14,5 km/s. However the meteorite started to break up before that. Iron rained in the area of 1,3 km2 . The widest crater was 26,5m wide and 6m deep. The strewnfield measures 1,75 x 1,0 km. This area had 200 craters and hundredrs of meteorite pieces. The common size for meteorite craters was 2 meters wide. There was around 24 over 10m wide crater. The meteorites in big craters were broken and the pieces were flewn outside the craters. The small craters holded complete specimens. In a wider 3,75 x 1,5 km area was found many smaller pieces and scrapnels. The biggest founded complited piece weight 1745 kg and the second and third 500 and 450 kg. The biggest piece was found in the bottom of a 4 meter wide crated in a dept of 3meters.

Specimen Description:
The specimen is a complite piece and weight 17 240g. Secimen have orginal crust and impact pit due to collision with another piece in the air.