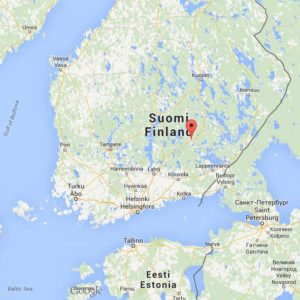 History:
At southeast Finland on the 12th of July 1910 a bright fireball, like the sun, appeared in the evening sky. It came down in steep angle from south to north and went off at the height of 30 km. A couple of witnesses saw the meteorite broke in two pieces before the fireball disappeared.

Some people claimed that they heard a strange hissing sound, before the thundering noice from the meteorite reached them some minutes later. After the fireball disappeared two hard explosions was heard and then thunder like noice. Meteorite fell down in two pieces ten kilometers southwest of Mikkeli (St Michel at that time).

Farmer Daniel Honkanen was at his hayfield at that day. Sun was still shining at eight o´clock (in official report at 19:25 o´clock) in the beautiful summer evening. Suddenly he heard loud noise up in the air and saw a black object coming straight towards him. Then it just vanished. It was right then he heared a thump, when the meteorite hit the ground.

Soon he and the women that accompanied him found a hole on the field boundary. It was 60 cm deep and in the bottom of that hole there was a broken 7kg meteorite (total weight for collected pieces 6802g). Later similar hole and broken 10kg (total weight for collected pieces 9650g) meteorite was found two kilometers away in the forest. Both meteorites have a black crust allover so the break up for these pieces must have happened high in the air.

Specimen Description:
St Michel is classified as a L6 chondrite. It is highly brecciated with black shock veins. Breccias are rocks composed of various sized visible pieces of angular rock cemented together. Due to the brecciated nature and shock veins St Michel has a very beautiful matrix.