Winona
The cist where the Winona meteorite was discovered 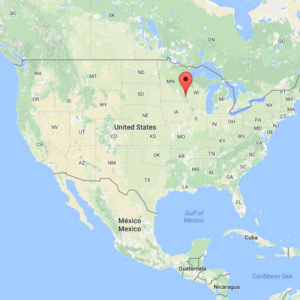 History:
The Winona meteorite was recovered from a stone cist on an Indian burrial ground, near to the ruins of the prehistoric Elden pueblo, Arizona, in 1928. The circumstances of the find suggest that the builders of the pueblo treated the meteorite like a living being, and burried it after they had actually seen it fall. Even our modern Western science has to admit that Winona is special; it became the namesake for an exceedingly rare group of primitive achondrites.

Dark brown rocks with a fine-grained texture, some of them exhibiting abundant metal flakes, and veins, giving them a chondritic appearance. However, relict chondrules have been observed in just one winonaite, Pontlyfni, the only witnessed fall in this group.

Mineralogy: Winonaites are composed largely of fine-grained pyroxenes, minor Mg-rich olivine, the iron-sulfide troilite, and reduced nickel-iron metal. The total iron content ranges between 18% and 30% among members of this group, possibly a factor of the close relation that exists between the winonaites and silicate inclusions in IAB iron meteorites. The IAB silicates are very similar to winonaites in chemistry and mineralogy, and they exhibit the same unique oxygen isotopic pattern.

Formation history: Recent research suggests that both, winonaites and IAB irons, originated on a common parent body – a partially differentiated asteroid that was disrupted just as it began to form an iron core and a silicate-rich crust. The disrupting impact mixed silicates into molten nickel-iron forming the silicated IAB irons, and mixed olivine-rich residues of partial melts into unmelted silicates, forming the winonaites.

Origin: Asteroidal. Probably an E-type asteroid, but no distinct match has been identified, so far. It is possible that the original parent body has been destroyed by a major collision and that only a few larger fragments survived, some of them on a near-Earth orbit, providing us with the winonaite falls and finds in our collections.

Specimen Description:
A 10.5 gram individual that was originally obtained by David New in an exchange with the Swedish Museum of Natural History.