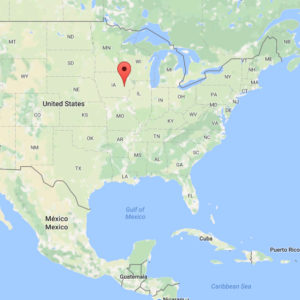 History:
“On the evening of Friday, February 12, 1875, at twenty minutes past ten o’clock, one of the most brilliant meteors, of modern times illuminated the entire State of Iowa, and adjacent parts of the States of Missouri, Illinois, Wisconsin, and Minnesota. The southeastern portion of Iowa was bright as day, while the great meteor, in descending to the earth, passed from Appanoose County to Iowa County. The meteor, in rapidly moving through the atmosphere, produced a great variety of sounds—rolling, rumbling, and detonations of fearful intensity—which in a large portion of Iowa County shook the houses as if moved by an earthquake.” The Great Iowa Meteor, Gustav Hinrichs, Popular Science Monthly ,Volume 7 September 1875.

About 100 meteorite fragments fell over a 47 km2 snowy countryside area from Amana to Boltonville in Iowa County. The first found fragment, a stone weighing about 3.5 kilograms , was discovered by Sarah Sherlock 3 kilometres south of Homestead. The area was wooded and covered by snow, impeding recovery efforts. On 10 February a 40 centimetres snowfall blanketed the ground, preventing the great majority of the fragments from being discovered until Spring. The 34 kg main mass was found along with a 22 kg fragment buried 0.61 m in the soil. As of December 2011, approximately 230 kilograms has been found.

This piece is bought from Edria Day. He wrote about the specimen:”.  I bought the farm from Carl Fred Hauman.  His wife’s mother, Hattie Sipes Beach was born in 1857 in Iowa city, Iowa.  That is 20 miles south east of Homestead.  She moved to Delta, Utah in 1912.” Meteorite comes with an old note saying:”
Piece of meteor that fell in 1876 near Oxford, Iowa.” Oxford is just a few miles from Homestead.  There wasn’t a fall in 1876 so maybe, when the note was written writer had forgot the exact year.”

Specimen Description:
This collection sample is a pristine fragment with six surfaces, five of which are coated with fresh fusion crust. It comes with an old note.

Comments:
The provenance of this piece is not solid without a proper analysis.
References: