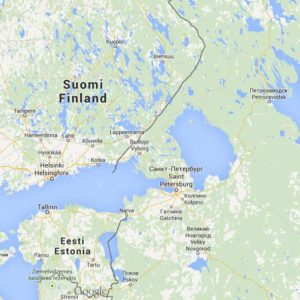 History:
On the 1st of June 1902 a big meteorite fell northwest of the lake Laatokka on the coast of Marjalahti. The fall happened little after the sun set around 22:05. The fireball was seen to approach from eastern sky. The Viborgs Nyheter told following:” A magnificent natural phenomenon was seen here in Kurkijoki (around 30 km from southwest from the fall site) on the 1st of June at around 22:00 o´clock. It was like a glowing ball followed with a long, but narrow fire tail. The size of the fireball was the half of the size of the moon. It moved almost horizontal from south to north on a cloudless evening sky at an approximate height of 25 degrees from the horizon. Then it seemed to break apart or exploded. After a couple of minutes a thunder like sound was heard. For a long time after the explosition a long white smoke trail could be seen on the path of the fireball.” The meteorite was seen widely all over southeast Finland. The meteorite hit a granite outcrop and break in to pieces. The event was witnessed by J. Koppinen, a farmer whose house was close to the falling site.

There is also another story where J. Koppinen was in a bed and pulled the blanket over his ears because the noise was very loud and the whole house shook when the meteorite fell. In this story the eyewitness is his son Antti who was returning from a date after ten o´clock in the evening and saw the meteorite fall. Which story is correct, is hard to say.

When the knowledge of a meteorite fall reached Helsinki, Dr H. Berghell from the Geological Department was sent to the falling site to collect the meteorite pieces. One piece was already missing when he arrived. A vendor had taken the piece, thinking it was platinum. He had pulled out the “worthless” rocky parts. Later also this piece was included in the collection of the Museum. The biggest pieces weighted 22.7 and 4.8 kg. The total known weight of Marjalahti meteorite is about 45 kg. Later when pieces where put together it was found out that in the end of the flight the meteorite had a shape of a blunt cone or a pyramid. The diameter was around 50cm and the height around 20cm. Later 2003 a 90 gram piece was found by Russian meteorite hunters. Also some people from Finland tried to look for more pieces from the area, but they were driven away by Russian soldiers.

Specimen Description:
The specimen is a complite crusted slice with one polished side. The specimen comes from a Museum trade with label.
(Helsinki University number D 5475).

Comments:
Marjalahti represents a rarely seen pallasite observed fall. The olivine crystals of Marjalahti are adopted as a scientific standard for the composition of olivine in pallasites.
Label from the collection of the University of Helsinki, now named: Luonnontieteellinen keskusmuseo