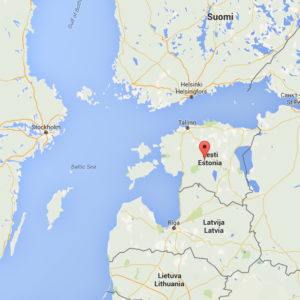 History:
Just after noon (12:30) on 8 August 1863, the Pillistfer meteorite fell with loud sounds near Pillistfer. 4 stones with a mass of ~23 kg were recovered. At least one of the four recovered stones encountered a building making this a documented “hammer” or meteorite that hit something during its fall to earth. The weights of the four stones were 14kg, 7.5kg, 1.5kg and 250 grams.

As an Enstatite Chondrite it marked by its overall sub-solar Mg/Si ratios, near terrestrial oxygen-isotope ratios, and highly reduced mineral assemblages (including Enstatite and other minor Silicates with very low FeO). The low-iron (EL) chemical group is also distinguished by moderately large chondrules, abundant metal (~10 vol%), and an extremely reduced mineralogy containing ferroan alabandite. As an EL6, like most EL chondrites, Pillistfer’s chondrites have been homogenized with low-Ca pyroxene converted to orthopyroxene and its feldspars coarsened. No melting of chondrules has occurred.

Specimen Description:
This is a courner cut with some fresh fusion crust. Pillistfer is an EL chondrite with 27.78% total iron. Even though a lower-iron E chondrite, the metallic sheen of Pillistfer under angled light is beautiful-like a thick star field. This is part of the Kurla piece.