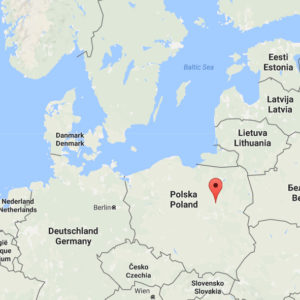 History:
The fall occurred on January 30, 1868 at 7:00 pm near the town of Pułtusk, about 60 kilometres (37 mi) northeast of Warsaw. Thousands of people witnessed a large fireball followed by detonations and a very large shower of small fragments falling on ice, land and houses within an area of about 127 sq km (appx. 78 sq. miles). The estimated number of fragments was 68780.
The fragments ranged in weight from half a gram to 9.095 kilograms (20.05 lb) (the largest specimen). The overall estimated mass of the meteorites was 8,863 kilograms (19,540 lb). The vast majority of the fragments were small (few grams), known as Pultusk Peas. The Pultusk meteorite is the largest stony meteorite shower ever recorded.

Composition and classification
Pultusk is brecciated and contains two varieties of xenoliths embedded in a dark brecciated matrix. It is a veined and brecciated chondrite with abundant xenoliths with various degrees of recrystallisation. Petrologic type 5 xenoliths prevail, so it has been classified as H5: an ordinary chondrite significantly thermally metamorphosed and with the contours of the chondrules frequently difficult to distinguish. The main minerals are olivine and bronzite. Kamacite, troilite and chromite are also present.
Specimen Description:

This is a complete oriented piece with fresh crust. Piece have a painted museum number and comes with two museum labels from Muzeum Geologiczne Pan w Krakowie. Piece is also listed in Poland national collection catalogues from, 1964, 1995 and 2001.