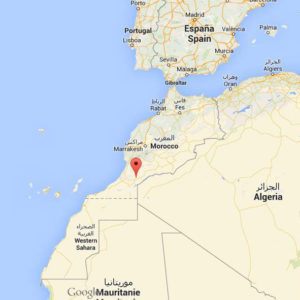 History:
A bright fireball was seen on Wednesday 9th of July 2014 at the 22:30 local time near Tighirt at the desert of Foum Lahcen in Morocco. The Fireball flew from northeast to southwest. The eyewitnesses said that the color of the fireball was firstly orange-blue and turned then to reddish. The fireball lightened the whole area and then broke to many pieces and was followed by five big explosions. Some people even say that it felt like a small earthquake. Unofficial reports say that the fireball was seen from a radius of 80 kilometers.

Soon after the news from the fall was published in many local Arabic papers and web pages hundreds of people came from Ouarzazate, Zagoran and Errachidia to look for the precious stones. The first found 22g fragment from this meteorite was brought to professor Ibhi for first analysis via Aziz Habibi. After that more than 3kg of fragments have been found.

The first foreign hunters in the area were Pierre-Marie Pele and Fabien Kuntz who were there on the 12th of July, just three days after the fall.
Photo: Pierre-Marie Pelé, meteor-center.com

The little oasis called Tighirt came to be the meeting point for meteorite dealers, meteorite hunters and for nomads. “You could go there to speak about the desert or to join to hunt with the locals”, told Pierre-Marie.

The eastern part of the strawnfield is quite flat and sandy. To the west it is steep stony hills. Sadly many hunters who had GPS didn´t want to share the coordinates so this strewn field map by Pierre-Marie Pele is unfortunately theoretical.
Tighert strawnfield map: Pierre-Marie Pelé, meteor-center.com

The heat of over 50 ° C made the hunting very hard. This was also the time of Ramadan so that made it even more difficult for the locals to hunt.

View from the hills to east of the strewn field.
Photo: Pierre-Marie Pelé, meteor-center.com

Many people thought that this fall was also martian due to the shiny fusion crust in the found meteorite pieces. That was similar to the famous martian fall Tissint. This meant that the asking prices for the pieces were unrealistic high in the beginning. Pierre-Marie told that it took two days to get reasonable offers of the found pieces.

Specimens Descriptions:
This is a complite 408g piece that was picked up just after the fall.
Specimen was acquired from Said Haddany and it is 95 % crusted. Tighert meteorites have amazing nearly 50 microns thick crust which have transparent parts.