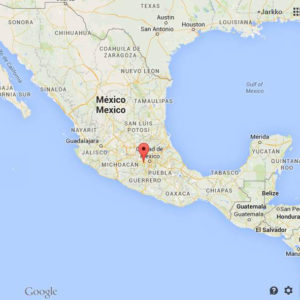 History:
The important Toluca shower comprises many thousands of fragments which have been recovered from a rather small area on the hillsides around the village of Xiquipilco (present name Jiquipil co), which is situated in a remote branch of the Toluca Valley network some 25 km north-northeast of Toluca. The fall happened probably more than 10000 years ago. The cumulative weight of all specimens in registered collections is about 2,100 kg, but it is quite certain that much more material has been found and distributed. However, the estimate that 22 tons of material has been shipped out of Mexico before 1929 (Nininger 1952b, based upon interviews in Mexico) appears exaggerated. Before 1850 very little material from the Toluca fall had been acquired in the U.SA. or Europe. During 1900 more and more material was found and moved to collections in U.SA. and Europe. Nowadays a total of about 2.8 tons as an estimate of what has actually been removed from the Toluca region.

Toluca first came to be known as a meteorite locality in 1784 (Gazeta de Mexico, as quoted by Chladni 1819: 339). The natives of Xiquipilco searched for the iron fragments after each new rainstorm, and they needed no other supply of iron for the forging o( their agricultural implements. Ramirez (1831) reported, “The Indians of Xiquipilco collect what they can, for it is not abundant. The owners of the haciendas of lndege and Santa Isabel barter for it with the Indians who chance to find it. generally at the beginning of the rains, when it becomes visible among the soil. The Indians of Xiquipilco make spades and axes of the iron, and the owners of the said haciendas use it for plows. About the year 1776, I went to Xiquipilco to see with my own eyes the famed native iron.l found two smiths established in the town who worked the native iron ; and in my sight they forged it and worked it into the shape demanded of them.”
This iron meteorite is a coarse octahedrite, chemical type IAB-sLL. The mean composition is 91% Fe and 8,1% Ni. It often contains large troilite inclusions.

Specimen Description:
This is a complete piece with natural patina and comes from Monning collection with hand painted number on the specimen.